I can’t get enough of Tzolk’in. 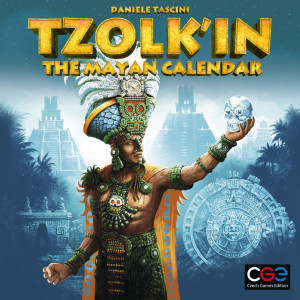 Wait, you want more of a review than that?  But I’m in the middle of a game on BGA.

Tzolk’in, by Czech Games Edition, grabbed me when I first saw it.  The ‘it has GEARS’ factor was a strong driver for me to try it out.  I knew nothing else about it other than that it has gears.  That appealed to the engineer in me, as well as the model/miniature painter, though I don’t yet own my own copy so I’ve not painted the gears yet.

Tzolk’in has not let go.  From the first play I saw the huge potential it holds for interesting strategic and tactical decision making, for the sort of action and engine optimisation that really appeal to me as a gamer one who was brought into this hobby via the unrelentingly addictive crack that is Dominion, and for nail-bitingly hard moments of critical importance.

So, it’s a worker placement game, which is a big box ticked for me.  Its theme is reasonably strong, from what little I know of the Mayans.  It has cool, well-made, high-quality components.

Speed – even playing a slow, rambly, somewhat poorly-explained (by me) learning game, my notoriously slow group got done in an evening.  Once we all know what we’re doing, the 90 minute on-the-box play time seems plausible, which is very rare for us.  We usually estimate between 1.5 and 2 times the normal play time.  It’s also a very quick game to set up, which helps it a lot (get the board out, shuffle and deal buildings, monuments, start tiles, pile up resources, done).  Online, it’s even quicker, with a two player game on BGA taking less than an 45 minutes in most cases.

Limited bookkeeping – because the accumulations of stuff are handled by the cogs pulling the workers up to higher spaces, rather than by needing the players to restock the board as in Agricola, Caverna, Le Havre, or many other similar WP and bidding games, the game mostly takes care of the bookkeeping by itself.  It adds to the speed of play significantly, and limits mistakes in accumulation.

But the real reason I like it is that I can see where I’m going wrong, when I’m going wrong, and find out where I could have done better; there’s always room to improve even when I’ve won.  Could I have got that building earlier, could I have stopped my opponents from getting that crucial monument, could I have picked up more of those cool crystal skulls somehow…?

On to the issues… the base game is perhaps a little unbalanced, with one particularly strong strategy being basically mandatory in two player against high skill level opponents – but the expansion goes some way towards fixing this issue.  It’s also perhaps a little samey after a few replays – but again, the expansion helps there.  The tribes add a lot of variety, and the prophecies add even more, albeit reasonably balanced, difficulty, plus a fifth player which is often very useful for my gaming group, good 5-player games we all like being somewhat few and far between.

First player advantage (and correspondingly, the potential for last player disadvantage) is a real problem.  To the point where the first player, unless they get a very specific and VERY good set of starting tiles, or in a two or three player game, the dummy players are located awkwardly, with basically always open with the same placements (0,1,2 on the Uxmal cog) as a very strong opening.  And similarly, the fourth player in a four player game has the potential to start off unable to place workers anywhere useful, which can really throw off the rhythm for the whole game, since this is a game about building synergies and momentum and rhythm.  It took playing it in person for me to notice this, though (I started online) and I’m still not 100% convinced that it’s a problem that needs a mechanical fix, although one does stand out (giving the last, or possibly 3rd and 4th, players some extra corn, or maybe just picking and revealing starting tiles in turn order).  But as it stands, it is potentially an issue.

Its biggest issue, to my mind, is its difficulty curve – or should that be mountain?  My first few plays on BGA were just DIRE.  It took a long time and not a little research to grasp the long-term strategies available in the game, and a lot more practice to get to be any good at even one of them – and I’m still not even approaching high levels at the most important two-player strategy.  I think without having done that research and being able to practice online, I might just have abandoned it.  Let’s not mince words; this game is hard.  It’s got a relatively short timeframe, with relatively limited numbers of actions available, and even more limited options on a turn-by-turn basis due to the pull-or-place mechanic, plus several points of critical long-term decision-making which take serious thinking to understand what resources are needed, especially when using the corn:resources trade action.  And unusually, and perhaps its biggest selling feature for me, is that it has a rhythm to it, it almost has a heartbeat.  That’s perhaps what’s most difficult about it, really grokking that rhythm.

It also helps a lot that it has online implementations.  BGA is good for live play, whilst BAJ is great for asynchronous play.  Both have their strengths, but add to the stable of games which I’m very impressed that CGE have made available for free online.

So… stick with Tzolk’in.  Even past its gimmick, it’s a very strong worker placement game, with a unique, interesting mechanic backing it up.  Once you get into the swing, once you get the rhythm, once you find its heartbeat… it can really start clicking.  A hearty 8 pyramids out of 10, unless I anger the gods this time round once too often!

*tabs over to BGA*