I’ve been quieter than I’d like for the past couple of months.  There are a range of reasons, not least typical winter blues, but also something of a slowing of games and gaming generally over winter, with one notable exception.  I’ve also not been doing much painting, because it’s dark, and not much woodwork, because it’s cold, and not generally having a lot of free time because of a variety of evening commitments.

So, that exception, then.  It’s X-Wing, and it’s bitten me pretty hard at the moment.  I’ve gotten pretty heavily into it, and went to my first tournament this weekend.  I acquitted myself better than I expected but worse than I hoped, but I’m still pretty pleased with my performance getting 3 losses (two with some MoV in my favour) and one win, plus a bye in the last round which I spent playing a friendly against the TO.

I’m not 100% happy with my list as it stands, but importantly, I have practiced with it a lot, it’s reasonably fun to fly, and with only two ships it’s competitive whilst not being too draining in terms of brain or time.  And one way or another, whatever happens, it’s quick.

But I digress.  For the new year then, I have only two really firm resolutions:

I’m keeping it simple this year, so as not to set unrealistic goals.  I have a range of ideas for cool things which I’m working on at a variety of rates, and being nice to myself is varying from exercise, to baking, to making, to eating out and going to the theatre, to treating my wife to a nice birthday present, to occasional job-hunting when I can work up the give-a-shit.

My first cool thing of the year was this.  Well, technically it was last year, but I’m not gonna quibble. 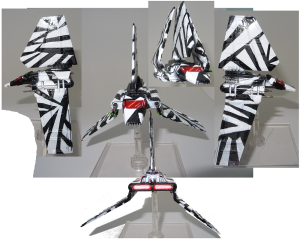 It’s a dazzle camouflage Lambda class shuttle from x-wing, mostly as a test of concept for doing the same thing to a bigger, harder-to-paint Decimator once I can figure out how to mask it without messing it up.  I’m pleased with the overall effect, and the engine glow in particular looks nice.  I’m looking forward to having a game to play where I can paint the minis and actually have them see the table often, which has been an issue with painting minis generally.  I think this is also going to set my overall scheme (at least for Imperials) which will be Stormtrooper colours – pure, bright white and stark dark grey/black.  It’s a scheme that looks really good on my Phantom, though I don’t have pics of that yet.  Not sure about my Rebs and Scum yet, but I’m not really planning on getting vast amounts of Rebels yet anyway.  Scum are more my jam.

So, I really enjoy X-Wing.  I’m going to write up a full blogpost later on the game, because I think it’s worth reviewing.  I’m pumped to get into a reasonably deterministic, high-strategy game with a strong community which shows little or no sign of stopping releases any time soon, unlike 4e which was already somewhat in decline when I started, and never really satisfied my competitive streak.

There’s probably more to say about this past month or two but I’m going to leave it here for now.