So, this is a big one for me; OxHack, my local hackspace, has finally, finally moved to its new premises.  We’re working in partnership with Science Oxford; they get a functional prototyping service and a lot of expertise, we get a shiny new space and plenty of nice tools.  The nice tools will be ordered soon, once the air handling is in place.

So, there’s a lot more still to do, sure.  And I’m looking forward to doing it.  But the important part is that a HUGE weight is off everyone now; the move has happened.  We’re in, and now we can start building a relationship with the folks at SO, and start working with them to do more cool things.

I’m looking forward to restarting the Dalek project, especially as the Dr Who anniversary is coming up again shortly, and I really want to get  it ready for EMF next year.  I’m looking forward to picking out the woodshop tools and finally getting started in learning the practical knowledge I want to go with all the theory I’ve been immersing myself in in my free time recently.

I’m really looking forward to the A0 laser cutter.  I need to spend some time designing the furniture I want to make with it, and working out where to source the plywood.

Overall, it’s a time of fairly major change for us.  We have a bigger, brighter future ahead of us, and I want to know where it can take me.  It’s going to be quite a ride.

It’s already been quite a ride, for that matter.  I’ve done a decent chunk of work to get where we are today, and I’m well aware that there are others who’ve done far, far more.  We’re still in progress on any number of minor things, including the logo competition which I’ve spent a lot of time on, and come out with some ideas I’m really pretty pleased with both alone and in collaboration with fellow hackers.

I need to spend more time on making.  I’ve gotten out of the habit since the Summer when I put our wedding clock together.  But I’ll get back into it soon.  I hope. 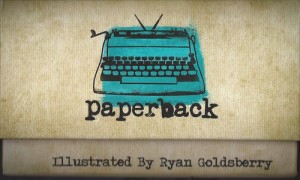 Paperback is a neat little game based heavily on Dominion, so of course, I like it.  But, oddly, I like it for rather different reasons than I do Dominion; I like it in large part because it’s an entry-level game.  I can play it with friends who I normally wouldn’t play board games, in the hope that that might change.  Like Ticket to Ride before it, it’s an excellent gateway game.  People can play it who are used to playing Scrabble on Facebook, and they can enjoy it for the word-game aspects, whilst I enjoy the deckbuilding aspects, and hopefully, they learn a bit about them as well.  Plus, I actually quite like word games anyway.

So, the meat of the thing:

Size and price. The game is small enough to be chucked in a backpack and brought out at need, though it’s a little large for that compared with say, Hanabi or Love Letter.  It takes a bit more room to play, but that’s not usually a problem for me.  It was also cheap enough to be an impulse purchase, and one I was glad I made.

Speed.  It’s a word game, so it could go a bit slow if people aren’t creative/vocabulacious, or the luck of the draw happens to be against you, but mostly it’s a lot quicker than, say, Scrabble.

Quality.  I got both the first Kickstarter printing (then donated it to the Hackspace), and the later retail printing, and aside from some cosmetic damage to the box on the first, and a couple of errata being needed on it too, they were both excellent.  Solid box construction, nice, weighty cards, some nice cubey cubes, well-printed and well-written rules and, well, some space for expansions, I guess.  There’s not a whole lot to the game, but what there is, is good.

Balance.  It feels like a game that’s been well playtested and is mostly well balanced, though there are some issues in places.  The kickstarter bonus Common tiles feel a bit off, in particular the space bar one, to the point where I’ve stopped using it, because it just makes the person who gets it SO much better.  And the (kickstarter bonus) special power tiles are similarly a bit off-balance.  So I guess the lesson here is that kickstarter bonus stuff in a game like this is often less carefully playtested and less well-balanced.  And that’s borne out in a lot of games.  Meh, it plays well just fine without the bonuses.

Errata.  The errata were only minor, but they were kind of irritating nonetheless.

That about covers it really.  A short, sweet review for a short, good game.  It’s of less value for my gaming group, we don’t play it much and tend to go for crunchier mechanical stuff over word games, so in that context not more than a 6 or 7, but it gets 9 out of 10 for me personally, as a gateway game my wife is willing to play!

Books: I finished the biography of Alexander Graham Bell which I’ve been reading.  It was long, a bit of a measured pace, and deeply inspiring.  Bell is far from the one-trick pony history seems to make him out to be – the telephone was among the earliest and is certainly the best known of his inventions, but he pioneered thought and invention in so many other areas from flight to tetrahedral frame construction, from the precursors of fibre optic technology to among the earliest thought on climate change and non-renewable resources.  The biography was also very well-written, and a highly enjoyable read, and I’d probably pick up something else by that author again.

I also read my first Pratchett since his death; it really affected me, and I’m going to write a longer post on it at some point soon.

Board games: Played Roll for the Galaxy twice and Navegador once.  I continue to not quite GET Navegador; I just couldn’t get my head round the trading mechanics in it, so I did a race to the finish on exploration tokens.  I didn’t do BADLY, but I came 3rd of 3.  It’s a game I don’t mind, but I don’t think I’ve played it enough to grok it, and I don’t think I’m inclined to either.  Roll ftG I really like; it takes the fun tableau building elements of Race, and removes the awkwardness of handling and assessing massive hands of cards and shuffling massive decks.  I really enjoyed it and I’m looking forward to expansions.

I’m also pumped for two Stonemaier games which will be going through major developments soon – Between Two Cities should be delivered before the end of the month, and Scythe goes into kickstarter next week, and will be a day 1 back for me.

RPGs: Descent counts right? Right?  Anyway, finished Act 1 of D2e, which is more than we’ve previously got to, and with the same set of characters too.  However, I’m mildly regretting choosing the Spiritspeaker Healer, it feel a bit weaker than even the other base set option.  Also, having finished the last encounter of the last quest at about 2130, we thought we could do the interlude – how long can an interlude be?

Four fucking hours later.  It was great fun, but it was long and sloggy.  Longer than a single quest.  Arg.  Still looking forward to act 2.

Board Games: Played Caverna again for the first time in a while.  It’s still enjoyable.  I continue my unblemished record of never coming in better than second.

Making: gearing up to redesign my version of the OxHack logo.  Also made another Dobos Torte for my sister and her husband to celebrate the birth of my nephew, which went well.

Books: continuing to enjoy the biography of Alexander Graham Bell.  Fascinating man, fascinating book, but I’m not finding anywhere near as much time as I’d like to actually READ it.