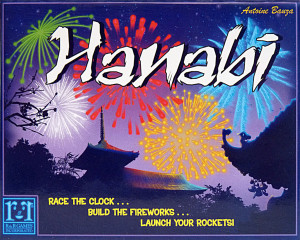 Hanabi is a beautiful little game; its incredibly simple gameplay leads to high quality and good replayability, and bedevillingly, bafflingly deep levels of skill and player involvement.  It’s a perfect example of how very simple rules can lead to emergent complexities.  The first play seems very straightforward, almost easy – I just have to tell my compatriots what to play or discard, how’s that hard?  And then you score 17 or 18 and realise that the trick is to give information-rich clues that allow multiple discards or ideally multiple plays with one clue.  And then you realise that every clue has not only positive information, but negative information as well – if that’s a 1, that means these aren’t… And then you realise that cards age in your hand, and the longer you’ve had something the more likely it is to be useless.  And then you realise that you might be able to give a clue to someone two seats away on the table that allows the person in between to play as well… the list is near-endless.  And then, once you’ve got all that and can routinely score high… you add the multi-coloured suit.  We haven’t gotten to that stage yet…

There are a few issues though: firstly, rules inconsistency – some versions, including the original, allow the giving of 0-thing clues (i.e. you have no 5s) whilst others don’t.  I like the ability; it adds to strategic depth without making the game significantly easier, but it’s potentially a problem if you’ve learned at one table and try to play at another, and it’s a really strange thing to change when doing a translation.

Secondly, components – it feels like a game that desperately needs card racks, which you can get in some deluxe versions, but I think they ought to be included in all of them.  We use the ones from Hab und Gut, so we didn’t need them, but it feels like a real missing element in the game, when you can’t put your hand of cards down between turns, because everyone else needs to see them but you don’t.

Thirdly, a more subtle one: this is a game that gets deeper and more interesting the more you play it, but at the same time has a strong potential to get less enjoyable the more you play it with the same group – because you wind up coming closer and closer to developing outright Bridge-style artificial conventions, wherein saying one thing means something completely different, agreed in advance, or where how you give a clue implies something (if I say ‘this this and this are 3s, it means they’re all playable, whereas if I say ‘these are all threes’ it means you can get rid of them, for instance), or where you assume a discard order from the start even before any information has been given.  These seem outside the spirit of the rules and get more and more difficult to avoid doing the more you play with the same group, because inevitably you discuss your score and your performance and way to improve.  For instance, one of my group adamantly maintains that ‘you have no 5s’ means you don’t have anything playable, purely by logical deduction; I just don’t see that, I can think of a bunch of situations where ‘you have no 5s’ would mean something else, mostly depending on them having previously been given other information.  There’s a simple test for them, I sometimes think – if you’d never played with someone before, could they understand your conventions without you explaining them – are they logically deducible from the game state, or not?  But, this causes issues in itself, because some things are logically deducible from the game state, but it’s highly unlikely that a new player would grasp them without explanation, so maybe it has to be someone who’s played a decent amount, but then, they’re much more likely to know some of the more logical near-conventions that feel uncomfortable.  It’s a difficult problem to work around.

But not too difficult for me.  I really like this game, I love how quick it is, how cerebral it is, and how animated it makes everyone in the group, especially when it’s all crashing down around our ears because someone forgot something, or someone said or did something they shouldn’t have and gave something extra away by accident.  I enjoy co-ops, which certainly helps.  And what I really like is that it really inspired me to think about what else mechanics like this could do – the hidden information mechanic really feels like it would lend itself to a mystery or whodunnit style game, it makes me feel like I’m a detective using incomplete information to deduce who killed Colonel Mustard; equally it feels like it could be some sort of Lovecraftian eldritch thing trying to build elder signs to summon Cthulhu.  It has a lot of potential.  Plus, it’s small enough to toss in a backpack, but long and re-playable enough to last in that context. Heartily recommended.  Eight fireworks out of ten.